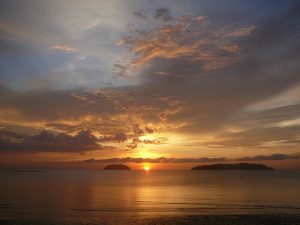 Borneo is a tropical island and as such, you can expect that it is always highly humid and rainy throughout the year. The wettest period is usually during the Monsoon period that typically falls between December and February. The months between March and October have milder weather meaning that they are more ideal for trips and holidays.

Below we have compiled a guide to help you in determining when to visit Borneo.

When is the Best Time to Visit Borneo?

The dry month in Borneo usually falls between the months of March and October meaning that there is less rainfall. This the best time to visit this area and coincidentally, it is the best time to visit the wild to see some orangutans.
The months between April and December are the best for diving activities. Between July and August, the visibility is usually high and you can even see up to a depth of 40 metres. If you are seeking to see some whale sharks, it is best that you tour Borneo between March and May.

If you are looking to admire the turtles on Lankayan Island, it is best that you visit from June to September.

During Which Period is Travel to Borneo Not Recommended?

During the months of December and January, Borneo usually records a higher level of rainfall which usually translates to rougher waters. Though it is still possible to travel during this period, if you are looking to see some wildlife, you may be disappointed as most of the fauna hides in the dense juggles. Generally, we recommend that you avoid Borneo in the months of December and January.

What Does Each Season Offer in Borneo?

The dry season is Borneo is considered to fall between the months of March and October meaning that this is an ideal time to travel. During this period, the island is hot and humid with the temperatures continuously rising as the rainy season approaches. During this time, fruit trees are usually in full bloom meaning that orangutans usually come out of the forest to eat. During this period, you can get some great photo shots of wildlife.  Take a trip to the Kinabatangan River for a wonderful day out.

In Borneo, the seasons do not vary that dramatically. You can expect the island to be humid and hot throughout the year. However, it is important to note that during the dry season, tourism is usually booming and as such, things can be more expensive. While exploring the rainforests in Borneo, be ready for rain at any time. It is true to say that the rainforests in this area live up to their name.

This period is considered the dry season in Borneo and it is usually generally hot and humid. The peak season for tourism usually falls between May and September. During this period, accommodation can be booked for weeks at a time especially in locations such as the Danum Valley where there are fewer lodges. If you are planning to visit this valley, it is best that you book ahead. This season is also the best to see orangutans in the wild as they enjoy the blooming fruits. Feel free to check out our holidays page more in-depth information on the best sighting areas and periods when you can best view the ‘men of the forest’.

Though this period is considered to be the wet season in Borneo, you can still visit the third largest island in the world during these months. During this period, it is very difficult to predict when it will rain and as such, your tour plans should not be hampered by rain forecasts. During this period, lodges, dive sites, parks and other attractions usually have less bookings. If you are planning a trip during this period, this can be highly advantageous since you can take advantage of low flight and accommodation prices.